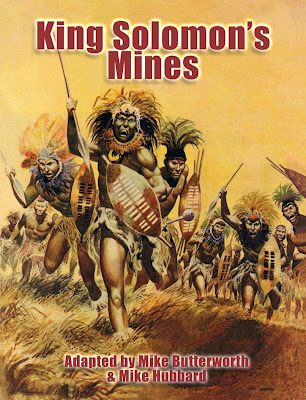 On the opposite side of the chamber were some wooden boxes. "There are the diamonds," I cried. Sir Henry held the light over the top box, which had been rendered rotten by time. Smashing my hand through the wood, I drew it out full, not of diamonds, but of gold pieces.

Welcome to H. Rider Haggard's classic novel adapted in full colour by Mike Hubbard, originally serialised in the pages of Ranger and reprinted for the first time! This was a daring attempt to publish the novel in its original language, using Haggard's own words, although abridged, making it one of the most faithful of all adaptations. 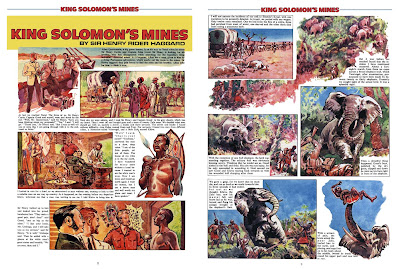 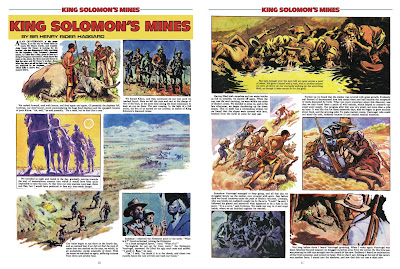 Author Mike Butterworth is better known for writing 'The Rise and Fall of the Trigan Empire', but his career began many years before as a scriptwriter and editor for the Amalgamated Press's Sun, where penned dozens of stories featuring historical characters (Billy the Kid, Dick Turpin, Robin Hood) as well as creating 'Max Bravo, the Happy Hussar' and 'Battler Britton'.  For Comet he wrote authentic historical dramas as well as creating the science fiction adventurer 'Jet-Ace Logan'. Editorially he created the innovative Playhour Pictures, Valentine and the teenage magazine Honey. A prolific novelist, he wrote crime thrillers, bodice-rippers and historicals under a variety of pen-names.

Mike Hubbard was born in Ireland of English/Irish parents but grew up in England. He became a prolific illustrator in the 1930s, producing covers and illustrations for The Thriller, Detective Weekly, The Passing Show and Everybody's. Shortly after the war he was introduced to comics through a series of adaptations of the classics in Knockout. He also became the assistant to Norman Pett on the Daily Mirror's 'Jane', which he took over the drawing of between 1948 and 1959. Returning to comics he visualised the delightful 'Jane Bond, Secret Agent' as well as bringing a further series of classics – ranging from King Solomon's Mines to The Secret Garden – back to life.