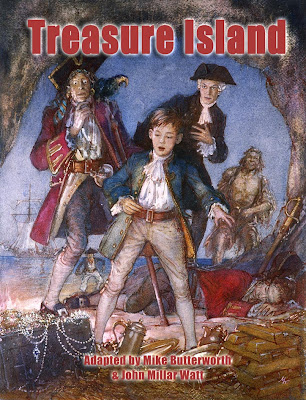 We had not built a fire the first night we had stayed there, and it seemed strange that there should be one burning tonight. It was at this moment that a shrill voice broke forth out of the darkness. "Pieces of eight! Pieces of eight!" and so forth, without pause. Silver's parrot, Captain Flint! I turned to flee, and ran straight into the arms of Long John Silver!

Here for the first time since it was serialised in the pages of Ranger is one of the finest adaptations of the classic Treasure Island, beautifully painted by John Millar Watt and retold in Robert Louis Stevenson's original language – making it one of the most faithful adaptations and well as one of the most visually stunning. 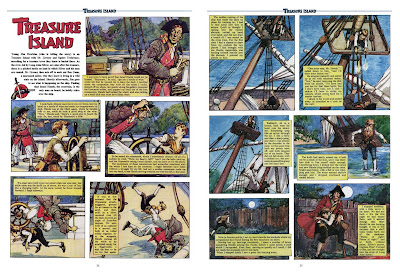 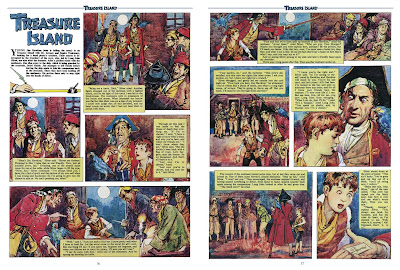 Author Mike Butterworth is better known for writing 'The Rise and Fall of the Trigan Empire', but his career began many years before as a scriptwriter and editor for the Amalgamated Press's Sun, where penned dozens of stories featuring historical characters (Billy the Kid, Dick Turpin, Robin Hood) as well as creating 'Max Bravo, the Happy Hussar' and 'Battler Britton'.  For Comet he wrote authentic historical dramas as well as creating the science fiction adventurer 'Jet-Ace Logan'. Editorially he created the innovative Playhour Pictures, Valentine and the teenage magazine Honey. A prolific novelist, he wrote crime thrillers, bodice-rippers and historicals under a variety of pen-names.

John Millar Watt was the creator of 'Pop', one of the most popular comic strips of the 1920s and 1930s. Published in the pages of the Daily Sketch and in a series of his own Pop Annuals between 1925 and 1950. The Scottish-born artist had previously worked in advertising and had exhibited at the Royal Academy. After retiring from the Pop strip in 1949, Watt concentrated on advertising and illustration work, to which he added comic strips in the mid-1950s. His richly painted artwork subsequently graced the pages of Princess, Look and Learn, Ranger and Once Upon a Time.