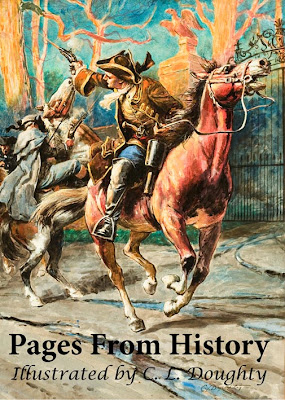 The latest publication from Bear Alley Books is our most ambitious yet, a bumper 172 page collection of art and comics by one of Britain's finest historical illustrators. Pages from History contains four classic comic strips, over 100 illustrations and, as a bonus, two episodes of an unpublished strip, all from the masterful pen (and brush) of C. L. Doughty.

Over half the comic strip art and all the illustrations have been scanned from original art boards and, thanks to modern digital printing, these pages have never looked so good. Lettering has been restored and, in the case of one strip, edited pages have also been restored.

The four strips, taken from the pages of Look and Learn, include the often grim tale of "Pott's Progress", the story of Prestor John retold in "The Crusader", the action-packed "A Sword for the Stadtholder" and a story of revenge as Richard Fairfax becomes "The Black Pirate". The book also includes a detailed introduction charting Doughty's career as a comic strip artist and illustrator in the pages of Thriller Picture Library, Sun, Express Weekly, Top Spot, Swift, Lion, Girl, Eagle, Knockout, School Friend, June and other papers. A gallery of over 100 illustrations reveals Doughty's skill as a chronicler of history from portraits of Britain's monarchy to the adventures of explorers, highwaymen and pirates. 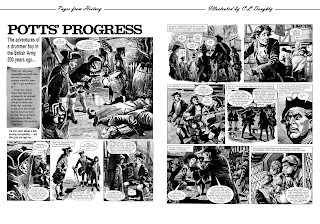 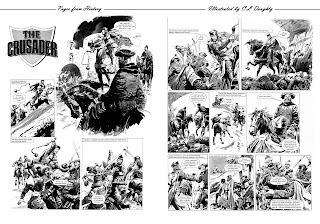 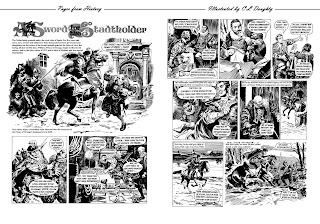 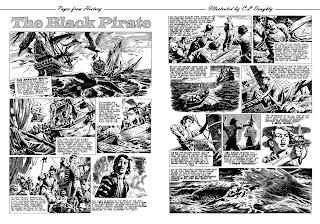 Pages from our four comic strips

About the Artist
Cecil Langley Doughty (1913-1985) began his career as an illustrator before the Second World War but returned from service to find many of the pre-War markets gone. Working firstly for The Children's Newspaper and then for Thriller Picture Library, Doughty became best known for his work on literary adaptations and the swashbuckling adventures of Dick Turpin and Robin Hood. His detailed, vigorous artwork was perfect for this kind of storytelling and his talents were made good use of in the pages of Eagle and Express Weekly where he could work in colour.

Doughty became one of the mainstays of childrens' educational magazines, working for Look and Learn, Treasure, Tell Me Why and World of Wonder in the 1960s and 1970s, usually on historical subjects but ranging widely from literature to the wild west.