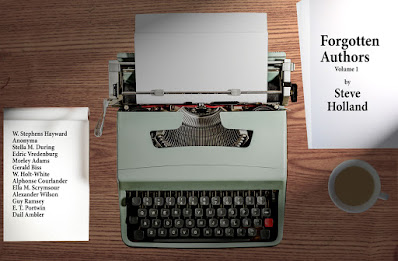 A collection of essays about authors whose work entertained millions but who are now almost wholly forgotten.


This is utterly fascinating:  what a terrific accomplishment!  It has held and engaged me.  Authors who are only names have been documented and recorded, from the pathetic to the successful, and everywhere in between.  This is incredible research, and I cannot begin to thank you enough for sharing it.  I’m dipping into it with absolutely enormous pleasure.—Richard Bleiler

W. Stephens Hayward: Gambler and alcoholic who wasted a fortune worth half a million in only a few years, but could count Robert Louis Stevenson amongst the fans of his novels.

Anonyma: The anonymous best-seller whose novels “No respectable bookseller would like his daughter to read  …  and no man who values his repute should suffer them to disgrace his shop.”

Stella M. During: Popular romance writer whose pedigree proved quite a challenge.

Edric Vredenburg: Thriller writer who turned to writing and editing books for the very young and who, as ‘Father Tuck’, was as familiar as Santa Claus on Christmas Day.

Morley Adams: Creator of puzzles, word games and number games in print and for the radio that entertained millions of readers and listeners over the decades.

Gerald Biss: Author of popular feuilletons, whose The Dupe anticipated the infamous murder of Emma Levin in Monte Carlo.

Alphonse Courlander: Novelist and journalist whose Mightier Than the Sword was based on his own experiences of Fleet Street, but who was overwhelmed by the horrors of war.

Ella M. Scrymsour: Actress and playwright who is today remembered for her novel The Perfect World and as the creator of Sheila Crerar, psychic detective.

Alexander Wilson: Spy novelist who faked being a spy and had four families he successfully kept secret from each other.

Guy Ramsey: The journalist who broke the story of Rudolf Hess’s imprisonment in wartime Britain.

E. T. Portwin: Writer of romances for teenagers and stories for children who eventually sold his magazine publishing and printing empire for £8 million.

Dail Ambler: Screenwriter of  Beat Girl who spent her early career as a “fiction factory” churning out a novel a week.

Available as a Kindle ebook and a 218-page print volume via Amazon.